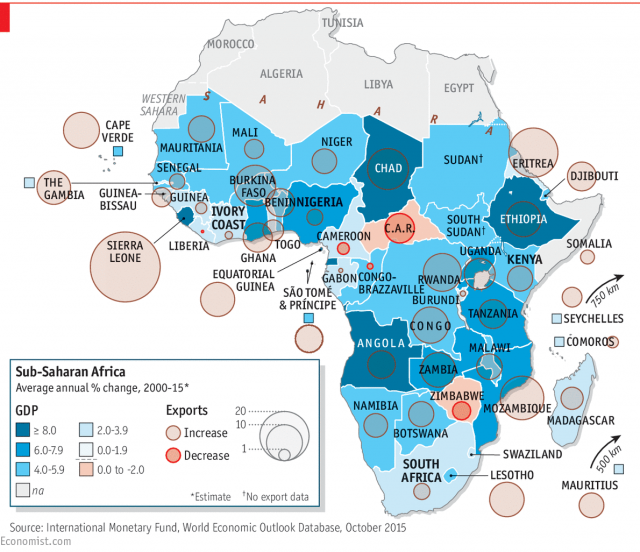 By The Economist Special Report.

The commodity boom may be over, and barriers to doing business are everywhere. But Africa’s market of 1.2 billion people still holds huge promise, says Daniel Knowles.

FOR A LOOK at the African boom at its peak, do as a multitude of foreign investors have done and fly into Abidjan, the capital of Ivory Coast. Visitors arrive in an air-conditioned hall where a French-style café sells beers, snacks and magazines. There is advertising everywhere, for mobile-phone companies, first-class airline tickets and a new Burger King. The taxi into the city smoothly crosses over a six-lane toll bridge. On the way to the Plateau, the city’s commercial core, cranes, new buildings and billboards jostle for space on the skyline. In the lagoon, red earth piles up where yet another new bridge is under construction.

Just five years ago, Ivory Coast seemed like a lost cause. Having been defeated in an election at the end of 2010, the then president, Laurent Gbagbo, refused to leave office. The victorious opposition leader and now president, Alassane Ouattara, mounted a military offensive to force Mr Gbagbo out. French troops seized the airport to evacuate their citizens (the country used to be a French colony). Protesters were gunned down by troops, foreign businesses were looted and human-rights activists gave warning about mass graves being dug.

Ivory Coast still has problems, as shown by a terrorist attack in March that killed 22 people. But its economy is the second-fastest-growing in Africa (after Ethiopia, which is much poorer), expanding by almost 9% per year. Foreign investment is pouring in. As well as the Burger King, Abidjan now has a Carrefour supermarket, a new Heineken brewery, a Paul bakery and plenty of new infrastructure. Sharp-suited, French-educated ministers explain in perfect English what they are doing to “open up”, “improve the ease of doing business” and “sustainably grow the middle class”. Expensive hotels, such as the reopened $300-a-night Ivoire, are booked up; their bars are full of affluent people striking deals. The country’s three port terminals, the biggest of which is being expanded by Bolloré, a French industrial firm, are working at full capacity, importing cars and electronics and exporting cocoa, coffee and cashew nuts.

This is the Africa of business magazines and bank ads: a continent that is rising at a prodigious pace and creating profitable new markets for multinational firms. But Abidjan also has plenty of reminders that it has been here before. For all of the new buildings springing up, its impressive skyline is still dominated by crumbling 1960s and 1970s concrete modernism. The roads may be new, but the orange taxis that ply them are still ancient fume-spewing Toyota Corollas, remnants of an earlier boom. For the two decades after independence from France in 1960, Ivory Coast enjoyed an economic miracle. Then, quite suddenly, the price of cocoa and coffee plunged and the boom faded as quickly as it had begun.

The deepest fear of today’s investors in Africa is that it may be happening again. In Ivory Coast’s neighbour, Ghana, thousands of government workers have been marching in the streets in the past few months to protest against their rising cost of living. Ghana relies on oil and gold, both of which have fallen in price, as well as cocoa. That, plus prodigious government borrowing, has caused a crisis. One US dollar now buys 4 cedi, the local currency; in 2012, it bought not quite two. Growth has halved since 2014, and Ghana is running a budget deficit of 9% of GDP and a current-account deficit of 13%.

According to the World Bank, in the year to April last year the terms of trade deteriorated in 36 out of 48 sub-Saharan African countries as the price of their commodity exports fell relative to the cost of their imports, mostly manufactured goods. Those 36 countries account for 80% of the continent’s population and 70% of its GDP. Eight countries, including two giants, Angola and Nigeria, derive more than 90% of their export revenues from oil, which has recently plummeted far below the price needed to draw in new investors. Growth across sub-Saharan Africa dropped to 3.7% in 2015, far below East Asia’s 6.4% and nowhere near enough to create enough jobs for the continent with the world’s youngest and fastest-growing population. The World Bank expects it to tick up again, but only to 4.8% in 2017.

Countries that happily borrowed from international investors over the past few years have now found themselves shut out of the markets. The stock of outstanding sovereign bonds in the region had risen from less than $1 billion in 2009 to over $18 billion in 2014. If growth continues at a decent clip, that should be manageable. But if it stops, interest rates of 10% or more on dollar-denominated bonds will make refinancing difficult.

The continent’s two biggest economies, Nigeria and South Africa, are already in deep distress. The reasons are different, but both have suffered from commodity-price falls as well as from atrocious economic management. The IMF, although loathed in much of Africa, is back, providing a $ 1billion loan to Ghana and preparing another for Zambia. Some fear a return to 2000, when this newspaper described Africa as the “hopeless continent”.

Yet despite that, Nairobi’s thriving malls and Abidjan’s humming ports show that there are plenty of reasons to stay optimistic. The economic conditions have got worse, but this is a very different continent from two decades ago, when troops from eight African countries were fighting in Congo alone. Wars still rage in South Sudan, Somalia, Mali and northern Nigeria, and violence bubbles in places like eastern Congo, the Central African Republic and Burundi. But broadly speaking, most of sub-Saharan Africa is now peaceful. Elections seem increasingly less likely to result in strife, even if they still generally return incumbents, and more and more often for unconstitutional third terms. The governments that come to power are still often corrupt and inefficient, but far less brazenly so than those of cold war despots such as Mobutu Sese Seko of Congo or Jean-Bedel Bokassa of the Central African Republic.

Africa’s 1.2 billion people also hold plenty of promise. They are young: south of the Sahara, their median age is below 25 everywhere except in South Africa. They are better educated than ever before: literacy rates among the young now exceed 70% everywhere other than in a band of desert countries across the Sahara. They are richer: in sub-Saharan Africa, the proportion of people living on less than $1.90 a day fell from 56% in 1990 to 35% in 2015, according to the World Bank. And diseases that have ravaged life expectancy and productivity are being defeated—gradually for HIV and AIDS, but spectacularly for malaria. Some of the gains may seem modest, but given that living standards across Africa declined during the 30 years after independence they are sufficiently established to prove lasting.

And for all that oil and metals have come to dominate economies such as Nigeria’s and Congo’s, the boom broadened beyond natural resources. Mobile telephones have transformed commerce across Africa, and now smartphones and feature phones (which are halfway between dumb and smart) are taking hold. In 2014, the latest year for which figures are available, 27% of Nigerians owned a smartphone. In many African countries 4G mobile-phone infrastructure is the only thing that works well, but it works at least as well as in much richer countries, and a lot can be built on it. What began with mobile-money systems such as Kenya’s M-Pesa is now branching into bank accounts, savings accounts, loans and insurance. That in turn is helping people rise out of poverty and invest in their future.

This special report will argue that despite some deep and entrenched problems, African businesses offer hope too. It is clearly risky to make sweeping judgments about an entire continent with 54 countries and 2,000 languages. This report draws on visits to various countries in sub-Saharan Africa, but four in particular: South Africa, Nigeria, Kenya and Ivory Coast, all coastal, urbanised and relatively rich. They certainly do not represent the whole of Africa, but your correspondent picked them because they each illustrate a different aspect of business across Africa as a whole. The businesses covered have not yet transformed the continent, but they show that African firms are capable of extraordinary innovation—if only they can be set free.